I thought this was rather significant considering the recent announcement of the closing of the Ringling Brothers Circus.
Ringling Brothers: The Six Lost Aprons
I didn’t write this. This was sent to me, I thought it was interesting, and thought I’d share it. The following article was adapted from a piece which appeared in the Baraboo News-Republic titled, “Yesteryear Revisited.” The text and accompanying photographs were prepared and submitted by Brother Steve Emerson, a Baraboo Lodge Past Master.
The night of January 21, 1891 in Baraboo , Wisconsin was a special night for many of the men of Baraboo, and it has a direct connection to a special happening, some 111 years later. The story includes six soon-to-be-famous brothers and involves the ceremonial regalia they wore on that special evening. In those days the Baraboo Masonic Lodge No. 34, Free and Accepted Masons, still met, as did all other fraternal organizations, in rented upstairs halls in downtown.The Lodge at this time, however, was strong enough that a building of their own was being considered. Members had arrived on horseback, by carriage or on foot, for the decisive evening, and the Temple was full.Also, in Baraboo of that day, the spectacular seven-year rise to national prominence of the Ringling Brothers Circus had brought not only respect but also good fortune to many of the brothers. Their father, August, had been a struggling harness maker.

As is well known, there were seven Ringling boys, and young Henry had only recently become old enough for Masonic membership. It was most unusual for as many as six of the Ringling Brothers to be in town at the same time. It was especially unusual on this evening that the six brothers occupied many of the major chairs in the Lodge. All seven Ringling brothers, including John , were members of Baraboo Lodge, before the year was out, Father August Ringling would join his sons in the Masonic Order. 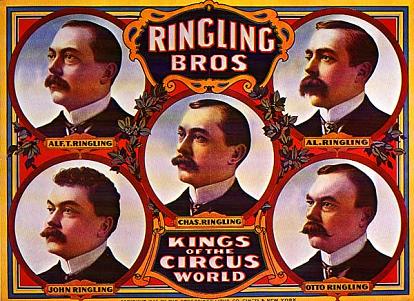 Special Aprons MadeOn this particular night in 1891, with such famous brothers occupying the chairs, some very special aprons had been ordered as gifts. Made of the finest blue velvet instead of the plain white linen usually worn, each apron was embroidered with silver thread and tassels.Central to the blue border was white lambskin, with the symbols of the office or chair being occupied embroidered thereupon. There is some speculation that the aprons were designed and produced by the Ringling Brother’s Circus wardrobe department in Baraboo. 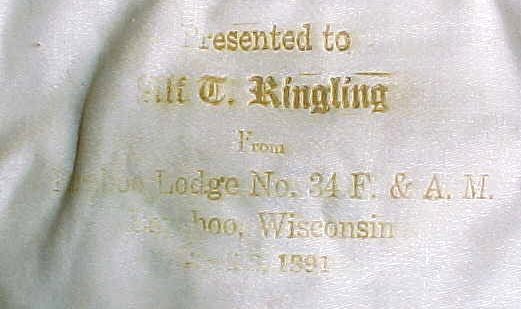 On the back of each apron is the name of the Ringling brother and the chair he occupied: Alf T., Worshipful Master; August, Senior Warden; Al., Junior Warden; Charles, Senior Steward; Henry, Junior Steward; and Otto, Tiler.Religiously speaking, the Ringlings were members of St. John ‘s Lutheran Church , but nearly every church in Baraboo was represented among the other brothers present that night.Aprons EmergeWhat happened over the years to the blue velvet and white lambskin aprons, with their silver embroidery, is of some interest.It is known that Mrs. Ida (Henry) Ringling, not to be confused with Ida (Ringling) North, gave the aprons nearly 50 years ago to one Richard (Joe) Bennett, boyhood chum of Ida’s grandson, Henry Ringling III. Henry III died in an auto accident near Baraboo in 1961, and Bennett had become a friend and frequent visitor to Ida, Henry’s grandmother.Among the gifts she gave to Joe were the aprons. It is presumed that they had been in the possession of Ida’s husband, Henry Sr., and later with his wife Ida, since 1891.Recently, an alert brother of Baraboo Lodge noted an apron listed for auction on E-bay.Upon investigation, it was determined that not only was this an authentic original apron, but that all six were available!Moreover, thanks to some caring people during the last 111 years, the aprons were in mint condition and were still kept in the original boxes. In some cases the original protective tissue paper was still present.Significant financial outlays were promptly made by five Baraboo Masonic Brothers-Lee Hoppe, Merlin Zitzner, Dave Deppe, Skip Blake and Rick Lewison. Others have made contributions for preservation of the aprons. This made it possible for the aprons to be returned to Baraboo, and they are now in possession of the Lodge.Plans for the Ringling aprons are incomplete, but because of their historic importance, they may be offered for display at the Circus World Museum in Baraboo. A similar display may appear on occasion at the Al Ringling Theatre, not even a dream for Al Ringling when his apron was presented to him in 1891.It would be 24 years before Al would build, in Baraboo, what the Theatre Historical Society of America calls the very first of the theatre movie palaces, which became so popular throughout the country. It still operates today, in its entire pre-revolutionary French architectural splendor, as perhaps the longest-operating motion picture theater in the county. The stage is used some 60 times each year for live performances as well.

Back to the Meeting 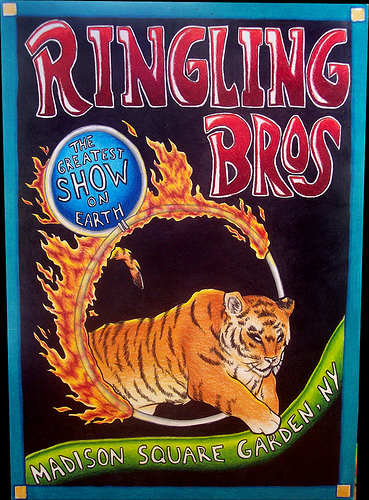 So, as we take up the story of that special night in Baraboo Lodge in January 1891, the Ringling Brothers occupied the chairs, the aprons were presented, and the Lodge prepared to build its own building. It is known that a committee was appointed and a fine building was built, on the NW corner of Oak and Second Avenue .
It was this building, approved at the 1891 meeting, with the Temple rooms upstairs and McGann’s Furniture on the ground floor, which would burn some 65 years later. This fire in 1957 destroyed nearly all of the Lodge records, regalia and artifacts.
By good fortune the ceremonial aprons had been removed by someone, and were cared for properly for 111 years. Now they have been returned to their rightful home in Baraboo, relics of a special night.
Special TiesBaraboo Lodge No. 34 observed its 150th year in 2002. The anniversary booklet published to commemorate the event reports that eight Ringlings were raised in Baraboo.Alfred T. (Alf) Ringling was raised on January 22, 1890; John was raised on March 1; Albert was raised on March 29; and Otto on April 9.Eleven months later, on February 4, 1891, August G. Ringling was raised. Henry came next on March 18; and August, father Ringling himself, joined the Craft on August 19, 1891.The city of Baraboo has a heritage of two communities: the circus and the Masonic community. On the surface they may appear completely different-the Circus being an entertainment form for “children of all ages,” and the Masonic Lodge being a fraternal organization created to help men better themselves and their community.

A connection between these two organizations began when seven Ringling brothers and their father became Masons. 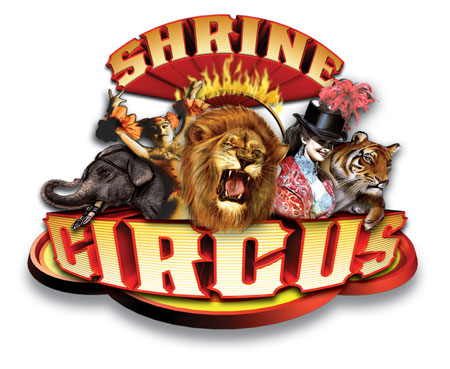 Throughout the years, there have been many Masons with circus backgrounds, including members of the Gollmar family (circus owners), the Moeller family (circus wagon manufacturers), General Tom Thumb, Harry Houdini, Buffalo Bill Cody, and Baraboo’s own Jimmy Williams (a.k.a. Happy the Clown), Tony Vinicki (Smaha), Robert Hocum (great-grandson of the charter Junior Warden).
The formation in the early 1870s of the Shrine helped create the bonds that grew between the Circus and Masonry. The circus is one of the largest fund raising events for Shrine clubs. It is also a major source of income for circus performers.